If there is no more specific Domain we do the governance affecting multiple Domains (and therefore Teams) in Delegate Circles, consisting of Delegates. 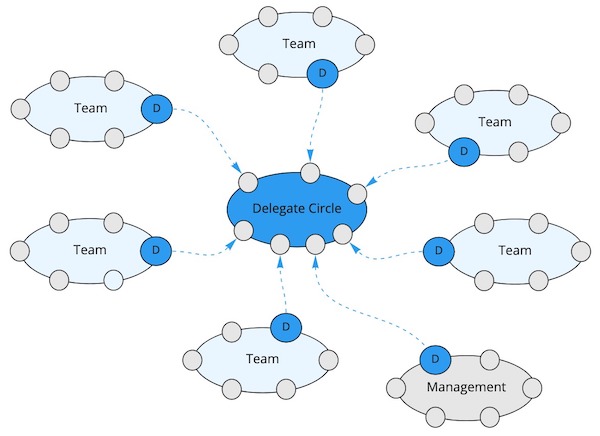 Active participation is mandatory for delegates of all teams. Non-participation increases the chance that your team will miss an important decision.

Delegate Circles learn and define how they deal with the general duties to address the topics within the domains for which they’re accountable:

From Discussions to making Governance

A Delegate Circle has many members who are obligated to participate actively. This in mind, discussions in meetings or in the official chat channel would cause a high burden on all members and would not serve the actual purpose of making decisions.

So we need a way to find out if something needs to be discussed in the big round or if a smaller group of people should discuss the topic at hand first and then present how they understand a driver, or concrete proposal to the big round to reach consent.

Permanent or semi-permanent Work Groups produce concrete proposals in various forms that enable the Delegate Circle to make informed decisions using our Consent Decision Making Process or more specifically the VSHN Improvement Proposals. Such a proposal can also be one simple and concrete question in the chat, so that a direct operational action can be done or planned.

All Circles and especially Delegate Circles have to handle VIPs they’re accountable for. Every Delegate Circle can organize this themselves as long as VIPs are handled and it’s documented, for example:

Members of the Delegate Circle shouldn’t have work to do for the circle, besides preparing for meetings, reading and commenting on VIPs and being Tuners for VIPs.